A friend wrote to me about cleaning out a closet, and finding things that he had written long ago.  He said something about being mad, or “out of his mind” when he wrote them, and then said that they should be burned upon his death. 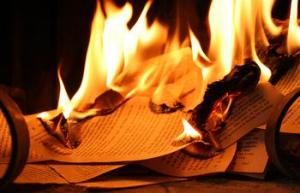 I, too, have things that I hope are burned upon my death.  But I increasingly wonder at how this amounts to a hope that parts of my self are burned.  (So “hope” needs its scare-quotes.)  When I’m not “out of my mind,” as he put it, I ultimately don’t trust anyone to do that burning but God.  And then I don’t really trust God, because God is always what I think as God and not really God.  But I DO trust God to be God beyond all that.  Mostly.

Now my friend’s missive has got me thinking about being “out of my mind,” and suspecting that’s where I am always, which is part of the problem, and also a large part of the wonder.

And now I have turned this into a blog post, which is rather like burning it, I suppose.

Replies are moderated, and not all will appear (but I will see them). Cancel reply